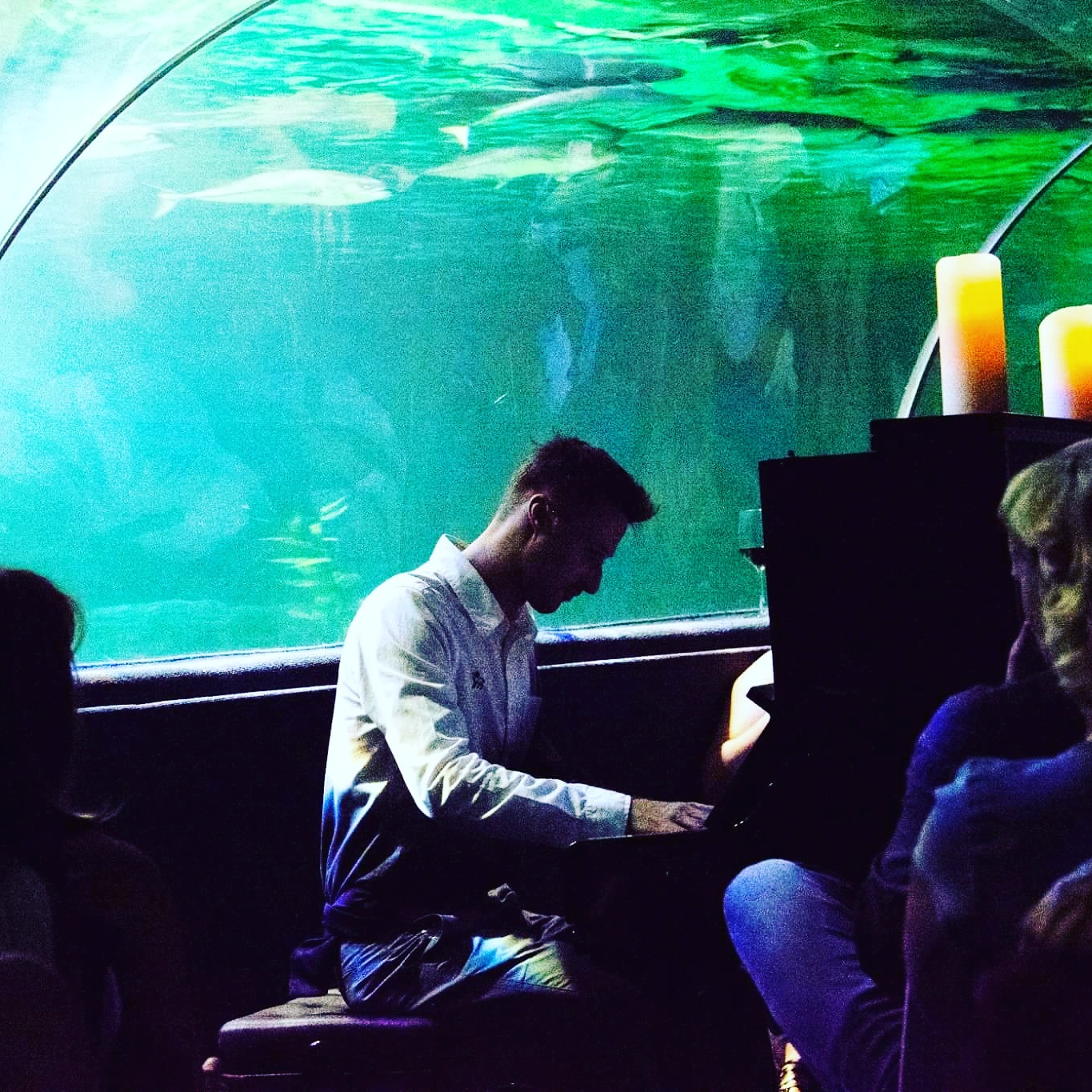 The Bangkok Ocean In Motion Film Festival is brought to you by Ocean Recovery Alliance, an NGO based in Hong Kong, with screenings as part of the Free Form Festival and two shows at the Bangkok Screening Room.

You will be treated with a variety of short and medium length movies about the ocean from around the world, to excite, inspire and entertain, all hopefully helping to lead to increased awareness about the ocean and its protection.   The screening will include a new, specially curated Ocean Experience performance, created for the Free Form Festival, which will include a live performance by Jonas Dept, who will play piano to a story about the ocean, along with a clarinetist.  Jonas has performed as a soloist in multiple venues and festivals including Burapha Music and Performing Arts Festival, Goethe Institut, Payap University, Low Fat Art Fest, Mahidol University, Alliance Francaise while he was also listed as official pianist for UK Royal Academy of Dance (RAD) and Imperial Ballet (ISTD), taking him to numerous countries over four continents.  Thanks to Thonglor Art Space, Jonas composed his first musical “Cocktails - The Musical” with lyricist Pitch Witwisit (Band August), which was awarded BEST MUSICAL 2016 by the International Association of Theater Critics.

Russel Ord wakes up one morning in Margaret River, looks over the photos he’s spent a large part of his life capturing and is filled with an overpowering sense of dissatisfaction. The shots are good and have graced the covers of surfing magazines worldwide, but deep down Ord know he didn’t walk away from a secure career as a firefighter to take just “good” shots. He wants to go to bed at night knowing he’s taken that “one” shot, the on that he’ll remember not because of the surfer’s reputation, but for the position he had to be to capture. Just down the coast is a thick, evil, brute of a wave he knows will deliver the opportunity to capture just that. But as a loving husband with three kids it’s not lost on him that the end goal and that drive to have “his moment”, isn’t going to come without sacrifice.

A lot of our trash ends up in the ocean - even trash discarded far upstream. Marine litter can travel hundreds of miles via rivers and waterways to even the most remote parts of the planet. It causes billions of dollars in damage, is a threat to sea life and even to human health.

Synopsis: Ever wonder why the sea is blue? This beautiful stop-motion film imagines how the oceans got their color. Writer and director Vincent Peone tells the story of a young girl falling overboard at sea and having a magical experience in the ocean’s depths… a poignant metaphor for what he thought might be going on in his sister’s mind while she was in a life-threatening coma. Peone wrote this intimate and touching film years ago and finally had the means to bring it to life with Field Day. Much of the score was actually recorded underwater, which lends the film’s incredible and fantastical visuals an entirely unique feeling and tone.

Dugong and Seagrass Conservation Project partners in Sri Lanka are working with local communities in northern Sri Lanka on policy, research, outreach and economic incentives to protect the dugong and the seagrass of northwest Sri Lanka.

This is a short film about the impact and rivers have on the quality of our water in the ocean, and what we can do about it. Rivers and creeks are like arteries that flow to our heart, the Ocean. Plastic pollution is like cholesterol trying to get to the heart, downstream. Join us for a journey to Central America and South East Asia where groups are helping to stop the flow of the community's "cholesterol" - plastic pollution, before it impacts those further downstream, or once at sea and along our coastlines and reefs. Everyone in any watershed community or coastline can use the power of the Global Alert app/platform to help inspire cleanups and long term solutions to slow the flow of trash in their waters. By using the "Don't Lose It" attitude before it is too late, and deploying booms, nets and catchment devices, we can reduce the impact of plastic pollution in our waters and communities, bringing about engaged change with exciting, positive benefits.

Mark Drewelow can be seen showcasing a revolutionary new bodysurfing technique. Pioneered by fin swimming in Europe, Mark has now brought their techniques paired with Leblon fins allowing him to reach and breach waves at an unparalleled speed. This showcased in some fantastic waves of the coast of the Orange County.

Synopsis: Comparing patterns of terrestrial and marine defaunation helps to place human impacts on marine fauna in context and to navigate toward recovery. Defauna­tion began in earnest tens of thousands of years later in the oceans than it did on land. Although defaunation has been less severe in the oceans than on land, our effects on marine animals are increasing in pace and impact. Humans have caused few complete extinctions in the sea, but we are responsible for many ecological, commercial, and local extinctions. Despite our late start, humans have already powerfully changed virtually all major marine ecosystems.

This video is about the value of the ocean in absorbing excess atmospheric carbon.vThis two-minute PSA discusses the importance of marine coastal habitats in mitigating climate change, ocean acidification, and other issues related to the increase in atmospheric CO2.

Synopsis: Ain’t No Fish’ is a short stop motion animated film featuring a bunch of hungry Arctic seals singing along to the music and lyrics of Sigman and Russell as performed by Hoagy Carmichael. It’s an ‘easy-go-lucky’ song about fishing and why ‘Some Days There Just Ain’t No Fish’. As the animated seals sing along to the show tune it’s slowly revealed in the background why there ‘Ain’t No Fish.’ Despite the upbeat attitude of the seals the garbage and oil industry that pervades the sea provides the answer.

Coral colors showcases the movement and enormous chromatic beauty of corals, one of the oldest animals on our planet, yet one of the most unknown despite the awe-inspiring vistas they create. Within this video we have tried to showcase the stunning beauty, spectacular colors of the coral as well as the mystery of their movements.

Two young innovators created the first sustainable surfboard fin based on ocean-recycled plastics. In this stunning documentary they prove their mission and reveal a transparent value chain of the waste material to design a performance product for surfers. The award-winning story is underlined by surfing, adventure and great personalities.

Kai Lenny, Stand-up paddle world champion in 2012, takes us on a ride with him Malolo SUP foil board in this incredible video.

Kai Lenny- “One of the most incredible feelings I've ever felt in surfing is when you can paddle for one wave but ride two! Hydrofoil Surfing has opened my world to new experiences and surfed spots I would have never looked twice at.”

The climate is changing, sure, but things are changing underwater, too. A quarter of the greenhouse gases we emit are absorbed by the oceans, changing their fundamental chemistry and causing all sorts of problems for the things that live down there. Which ends up causing problems for the couple billion of us who rely on the oceans for food and livelihood.

More information can be found on the Free Form Facebook page, the BKKSR page, or at http://bit.ly/BangkokOceanInMotion.

The Making of a Marlin, Producer: Costa Sunglasses/Washed Ashore

Now, we've taken the initiative one step further by commissioning a sculpture of a jumping marlin made entirely out of washed up beach trash. The sculpture is meant to serve as a stark reminder of how much trash can be found on coastal beaches, and start conversations about how anglers can become more involved in addressing the plastic problem. The nine-foot tall, seven-foot long fish was made by Artist Angela Pozzi and over 450 staff and volunteers from the non-profit organization Washed Ashore. They worked over 7 months assembling the sculpture using thousands of pieces of collected plastic trash found on Pacific beaches.