By Agence France-Presse in Nairobi 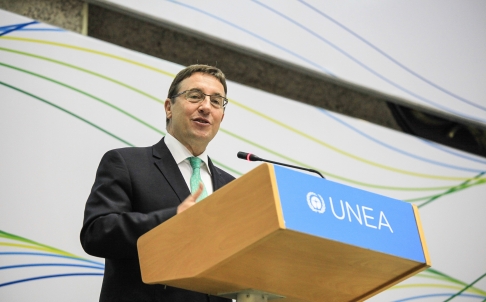 The dumping of plastic waste into oceans is causing at least US$13 billion a year of damage, threatening marine life, tourism and fisheries, the UN warned yesterday at the launch of a global environment conference.

"Plastics have come to play a crucial role in modern life, but the environmental impacts of the way we use them cannot be ignored," UN Environment Programme chief Achim Steiner said in Nairobi, Kenya.

Scientists have found tiny plastic fragments trapped in sea ice in polar regions, while plastic waste has killed marine life, whether it be eaten by sea creatures such as turtles, tangled up dolphins and whales, or caused "damage to critical habitats such as coral reefs", the report said.

While much of the plastic waste ends up in vast mid-ocean rubbish patches where marine currents converge, micro-plastics - tiny fragments less than five millimetres in diameter - have had a growing impact that was particularly worrying.

"Their ingestion has been widely reported in marine organisms, including seabirds, fish, mussels, worms and zooplankton," the report added.

This Article was Published in the South China Morning Post Here >>>