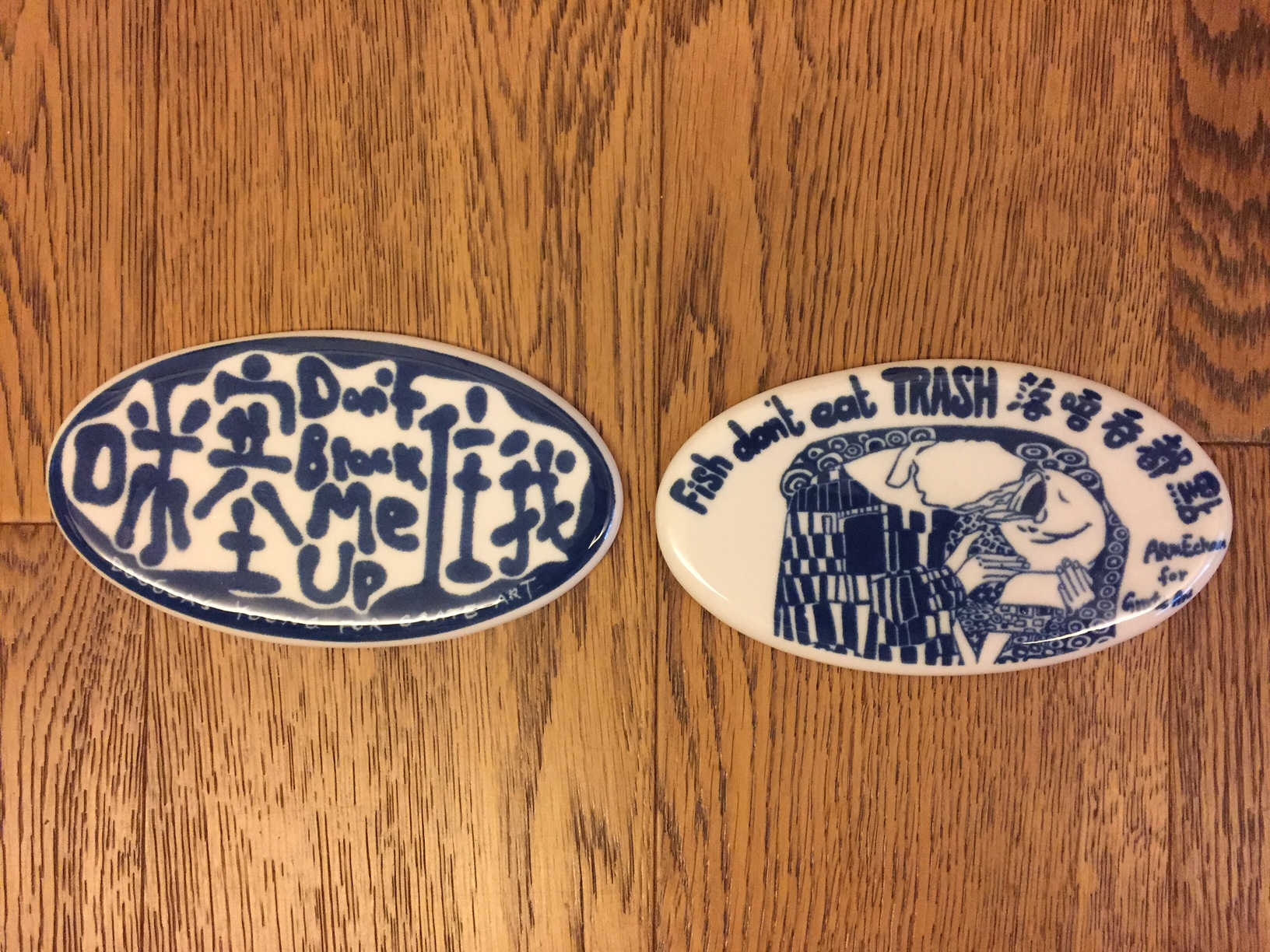 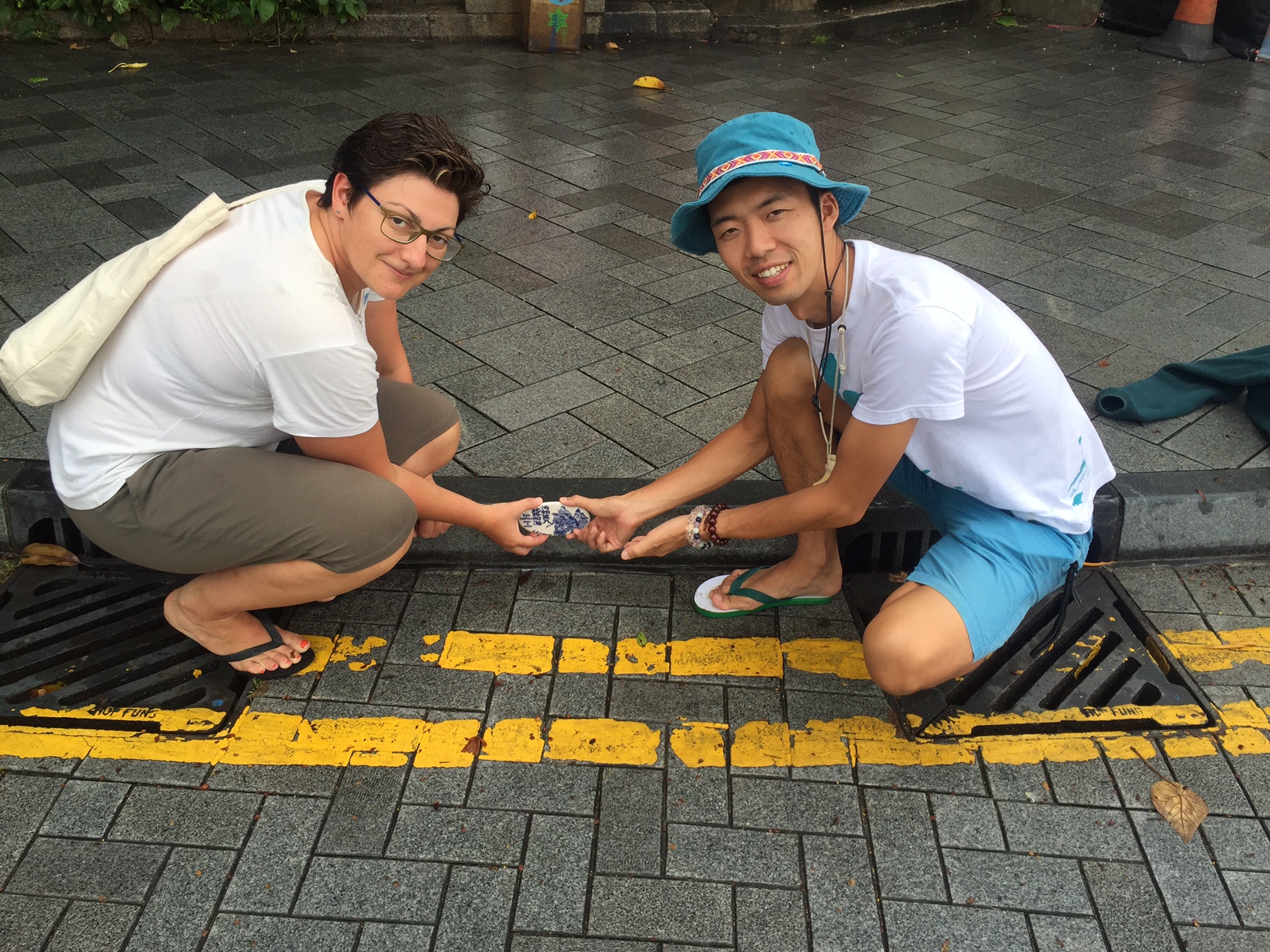 We are excited to have launched our Grate Art Project in Hong Kong on the streets of the Southern Disctrict in Hong Kong in 2016.  This program brings some new positive benefits to the city, using the community’s help.  Grate Art revolves around ocean and water protection, but does so by creating a message on our streets, which can be visible to all who walk by, to remember not to dump into drains.   This will help to develop local art/design by commissioning local artists (as well as two from China), and will also add some interesting color to our streets.  The art features bi-lingual messages that go along with the image in order to remind people not to dump or litter in our drains.   Read Press Release Here (English)/(Chinese)   We hope that your district, or city (anywhere in the world) can also replicate some of this program, and maybe be a "sister city" with our Grate Art program in Hong Kong.

Congratulations, and thanks, to Simon Holliday and Shu Pu, for his amazing Clean Cross Swim from Hong Kong to Macau on May 24th, 2014, setting a record on the 35km crossing across the Pearl River Delta, with a time of 10hrs, 20min and 30 secs.  Simon raised over HK$235,000 for the Grate Art project, and ocean protection.  Special thanks to all of the team who made this possible, as well as supporters Cotai Water Jet, Lifeproof, Escapade Sports and Fogo Samba.

You can help by donating to this project, as the more funds we have available, the more plaques we can install near the drains in the South Side of Hong Kong Island, and then hopefully expand to other districts. See information below for donation options.

Objective:  To bring awareness to ocean protection by giving a colorful, artistic reminder, along our city streets, and in locations where they do not expect there is an impact.  Hong Kong is surrounded by water, and its drainage systems can be a big positive influence if dangerous runoff and waste is decreased.

Program:  Commission eight artists (six local and two from China) to create eight (8) different logos/signs that remind people not to dump in the drains.  These will have a bi-lingual message, and will be eye-catching yet subtle due to their relatively small size on the sidewalk near the drain.

Benefits:  Grate Art supports the art community, brings color to the streets, and builds awareness and education about water/ocean stewardship.  This in turn, benefits our local communities, environment and tourism, while also giving impetus for new education programs to be created around the designs and locations of their placement.  Broad benefits include improved water quality and reduced public waste reduction.

Grate Art for your walls – for any single donation of over HK$10,000, the donor will be able to receive a framed set of the eight completed plaques, as art, for use in their home or office.

Donations can also be made via our Just Giving webpage.

The characters created by design duo Graphic Airlines champion the "aesthetics of ugly".  Tat & Vi joined force in 2002 and have since become stalwarts of Hong Kong's burgeoning street art scene. Apart from publishing and exhibiting their work since 2006, the pair produces their own design products. You are able to board their site at www.graphicairlines.com. 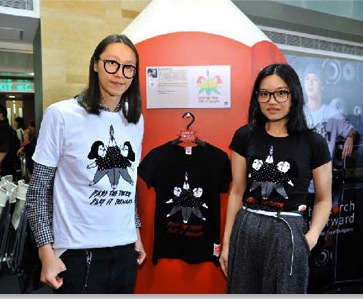 Graphic Airlines’ work have been exhibited all over the world, including Paris, New York, Berlin, Tokyo, Shanghai, and Taipei.  They have participated many local exhibitions, and helped in the making of HK artist HOCC’s music video “humor”.  They have also collaborated with Agnes b, Sport B., Adidas, Nike , Puma, Lomography, Moleskine, Dr. Martin, GOD, and Swatch. 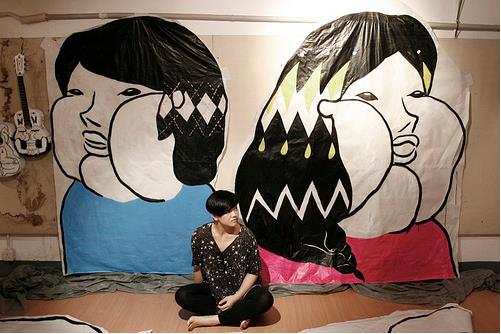 William Tong is a local artist and illustrator. The love for nature and long for freedom help him develop his Temphouse series and Amazing Fish-Fusion series. Excel in drawing skill, the Temphouse series has successfully depicted the scenery of Hong Kong. Coupled with the artist’s imagination, this series is native but self-expressive: intended creation becomes random fragments of life that receive a great resonance from audience. Although a fishing lover, the desire to protect the ocean life has make William decide to pen to fish; thus it comes the environmental series Amazing Fish-Fusion, which successfully represents how ocean life being affected by environmental pollution through delicate and strong lines. 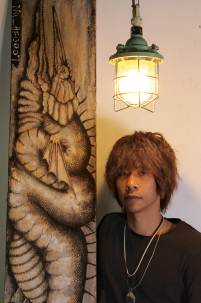 Three pieces from this series received the Award of Excellence in the Greater China Award for Best Creative Illustration. In addition to 2-dimensional works, William has also transformed the meticulous technique and skills to his 3-dimensional works which are as stunning as his drawing. He is a multi-disciplinary artist and his works have been acquired by private local and overseas collectors.  His work can be found at: www.temphouse.hk. 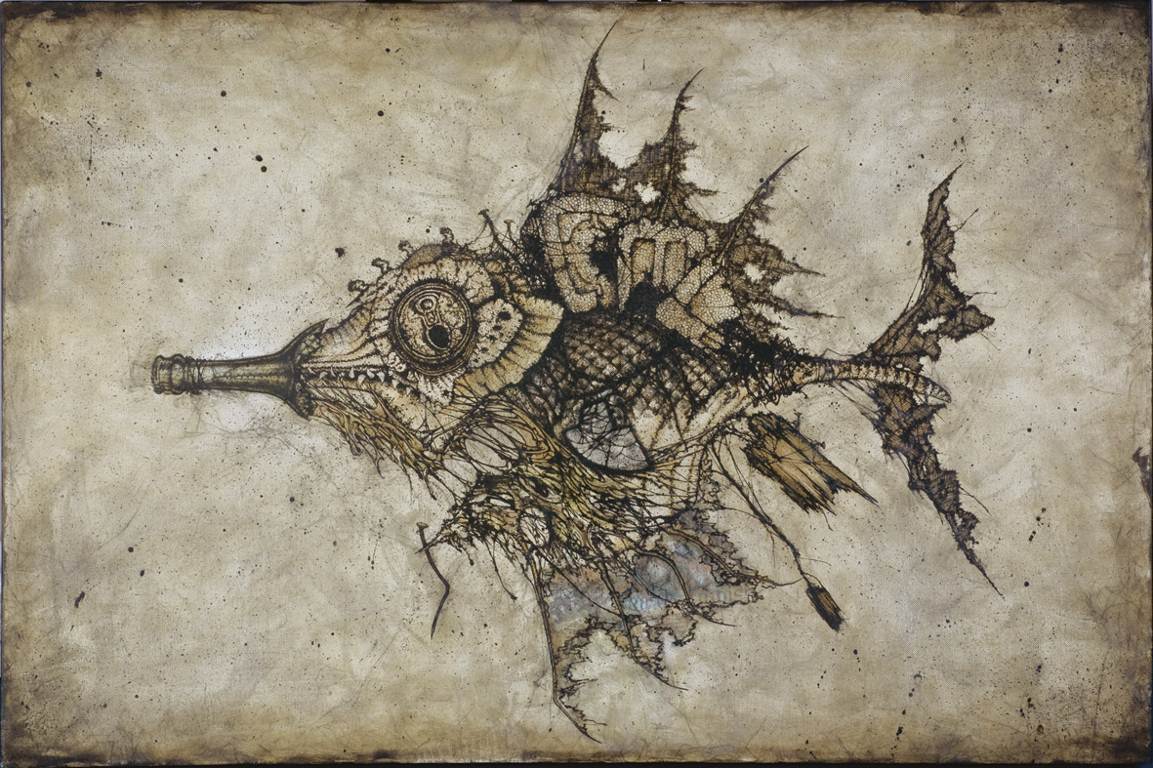 Tang Nan Nan is a Mainland Chinese artist.  He is a lecturer at Jimei University Art Institute in Xiamen, China; meanwhile, completing his PHD at China Academy of Art in Hangzhou, China.  His recent work focusing on “Modern Day Nostalgia” includes film series “Nameless Beach”, which later inspired the creation of “Floating Dreams” and “Falling” exhibited at 2012 Shanghai Biennale.  In 2013, this series were further explored to include watercolor series  “Forgotten Sea” and film installation “Floating Dream – India”.  His nostalgia of the sea has been an important inspiration of his recent work.

Tang Nan Nan was nominated for the Best Film Design of One Minute International Exhibition in Amsterdam.  His oil, watercolor, photography, film and art installations have been exhibited in galleries both at home and abroad.  His portfolio can be viewed at www.tangnannan.com. 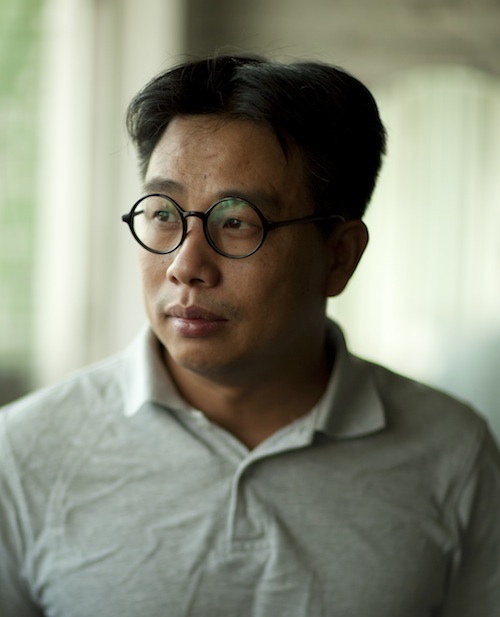 Douglas Young was born in Hong Kong in 1965 and trained as an Architect in Sheffield University and the Architectural Association in the United Kingdom. He co-founded the Hong Kong-based lifestyle brand, Goods of Desire or G.O.D., and has been the creative force behind it ever since. Since 1996, G.O.D. has grown into an established, multi-faceted lifestyle brand selling home furnishings, fashion and premium gifts with a distinct Hong Kong flair. 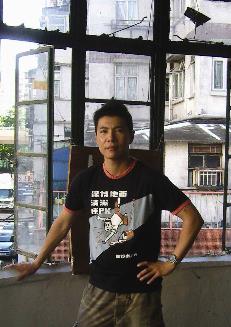 Douglas’ work is deeply rooted in his native city of Hong Kong. Many of his inspirations come from everyday scenes that are disappearing at a rate that is real, yet too slow to be felt on a daily basis. This gradual erosion of native culture is happening not just to Hong Kong, but threatens Asia as it modernizes. Douglas’ work often touches upon sensitive social issues that are considered taboo; this has resulted in much public outcry and on one occasion, an arrest by the police.

Through his work, Douglas hopes in inspire future generations of designers to seek inspiration from Hong Kong and foster pride in the community. In 2009, Time Magazine published a feature of the G.O.D. Street Culture Museum and referred to Young as ‘one of Hong Kong’s foremost designers’. 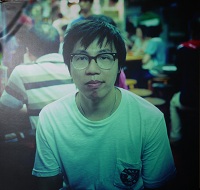 Born in 1973 in Hong Kong, Chi Loy graduated with a degree in Art Studio (UC Davis) in 1997.  In 1998 he moved back to Hong Kong, and has worked here since then. His art statement is: “I am looking for decent people in cramped environment as well as the future of me.”   He always thinks of how living space affects people’s lives and mind.  The idea comes from his experience of living in vast environment in the U.S. and cramped space in Hong Kong. 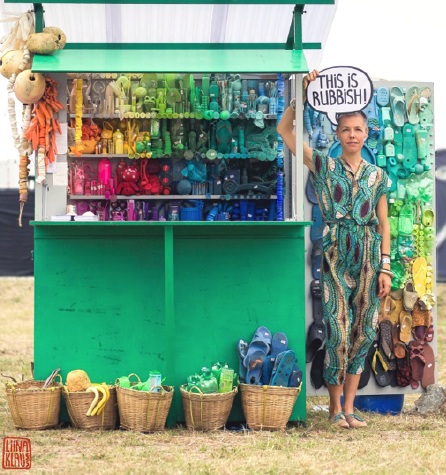 liina is a land-artist from Germany, based in Hong Kong since 2007.  Using lost objects found in nature as a starting point for her works, shhe creates delicate mosaics to large scale installations within the natural environment.  Assumed cultural conventions get distorted in her environmental installations, as the viewer is confronted with value within the worthless, beauty within the ugly, innocence within ignorance. She is particularly interested in the borderline between culture and nature and the intersection of the two. The full scale of liina's work can only be experienced when directly participating in the making of an installation. "What you touch touches you” she says. Through her works liina seeks to touch an inner landscape, one that resonates with all senses and leaves us bare and pure in the present moment. Awareness and healing within and without are the deepest aspects of her work.

Motivating big groups of diverse people, exposing them to natural elements and experiencing creativity, community and nature together is thus as much part of the art work as the final installation itself. "Let's bring it back to your community, back to the individual, all the way back to your own two hands. This makes it tangible. This makes it solvable. The situation is out of hands and is in our hands both at the same time" liina says. Her practical art education focuses on phenomenological   relationship between art/culture/community and nature/environment utilizing art as a bridge to create awareness and inspire activism.

liina has realized several environmental art and community projects in Hong Kong, Malaysia, Indonesia, Taiwan and Portugal. She had her first solo exhibition in Hong Kong in 2013. At present liina works as an independent artist in residence at various schools and universities in Hong Kong facilitating art-awareness-activism projects which include tracing-waste workshops and curating-the-beach outings. 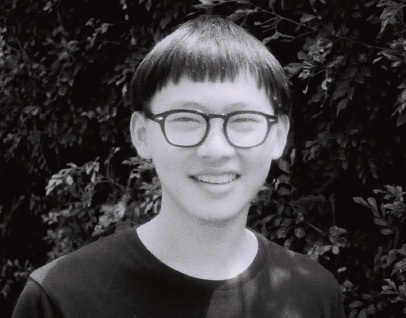