On March 11, 2011, a 9.0 earthquake off of the coast of Sendai, Japan, caused a large scale discharge of debris into the ocean as a result of the tsunami that hit much of the northern coastline of Honshu Island.  Due to the disaster on land, at the time there was no ability to control, capture or track the debris flow in the ocean, and accordingly, all of the material that came from land in the tsunami is still at sea.   Some of this may have been pushed back to the coastline in Japan by winds and currents, but the prevailing winds and currents at the time meant that most of the debris went into the open Pacific Ocean.   It is not known how much may have sunk to the bottom at this time, and how much is still floating.  Only models, based on existing knowledge of current flow, wind direction, and other oceanographic data, can help to estimate where the debris may be, and how it is moving across the Pacific.  This Tsunami Debris Tracking Project was one of the first attempts to locate some of the floating debris material, and was the first in the world to mark it with buoys that have satellite transmission for tracking, as they float with the debris into areas of the North Pacific Ocean.  These buoys are still 'live," and can been viewed to see where the currents in this part of the Pacific have taken the buoys since December, 2011.

There are many issues that debris from a tsunami might present within the marine environment:

1. Large dense patches of floating debris are an immediate threat to maritime safety, including safety of fishery activities.

2. Debris may shelter different species that are characteristic for the coastal waters ofJapanand help them to survive a trans-Pacific voyage to the waters of the US West Coast andHawaii.

3. Tsunami debris may increase the amount of plastic and other material that has accumulated in the North Pacific, and may exaggerate its impact on the ecosystem throughout the ocean.

Ocean currents play major role in carrying (advecting) both floating matter and matter dissolved in sea water. Thanks to the networks of drifting buoys, maintained globally in recent decades, as well as to the use of satellites, knowledge of the surface currents and quality of models diagnosing and forecasting currents at the ocean surface are greatly improved.

Predictions of one such model (Maximenko et al., 2011) are shown in Figure 1. The debris from Japan is expected to drift eastward and will reach Midway Island in approximately one year.  In approximately two years, it may reach the US West Coast.   Most of the debris plume will then re-circulate to the southeast, potentially reaching the convergence zone northeast of Hawaii called the North Pacific Gyre.  If the material does not sink or biodegrade, it can remain in this area for many decades, potentially polluting Hawaiian beaches when storms or winds are strong enough to move some of the material from the convergence area to shore. 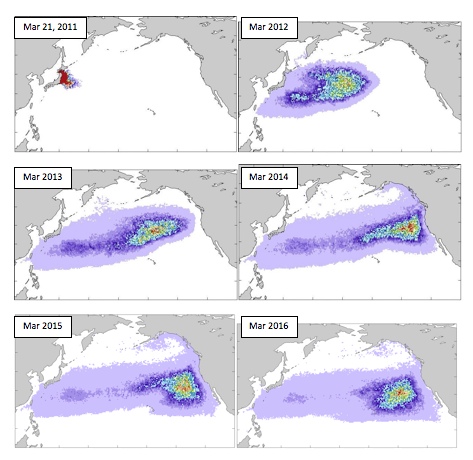 Figure 1. The probable propagation of the plume of marine debris, induced in Japan by the tsunami of March 11, 2011, in the model of surface currents.

Unfortunately, the direction and movement of debris is complex, as there is an interplay of forces acting on debris from wind, waves and upper-ocean currents, making  each object move somewhat differently to one another, even in similar conditions.  The ability to locate this debris, and track it with satellite transponders that float with the material, is important to be able to validate assumptions about ocean currents and modeling, but more importantly, to be able to predict its whereabouts for the safety of vessel traffic and coastal based activities.

After gaining real-time observations, practical models may be modified to adequately simulate the movement of the debris.  An example of such a diagnostic model is shown in Figure 2. The Surface Currents Diagnostic model (SCUD, http://apdrc.soest.hawaii.edu/projects/SCUD/) has been developed to simulate trajectories of standard drifting buoys which have a large drogue at 15m depth. The model uses data of satellite altimeters (measuring elevation of sea level) and scatterometers (measuring wind speed and direction at the sea surface).  Similar to that of predicting weather, the calculation of particle trajectories, based on currents (such as the one shown in Fig.2), carries significant uncertainties and needs to be validated by direct observations. The current drifter array has a large gap in the area of the existing tsunami debris plume, which is where this project can be useful to help increase the number of datapoints and observations for others to study. 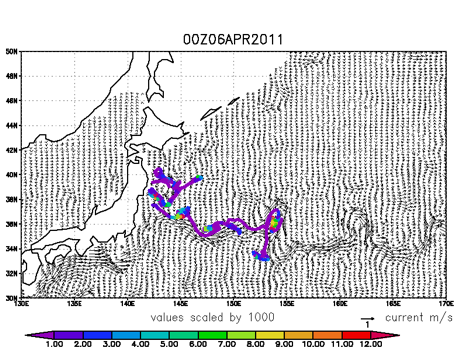 The project includes the deployment of drifters with satellite transmission in the eastern areas of the predicted debris flow, and will focus on an area to the North West of Midway Island.  The assessment of the location at the time will be based on real-time data of other satellites, e.g. SAR (Synthetic Aperture Radar), ocean colors, and optical images, as well as reports on recent sightings of debris in the area. According to the most recent predictions (as of the end of November, 2011), the debris plume has spread into a wide area, stretching eastward along the Kuroshio Extension current, with a portion remaining near Japan within large anticyclonic eddies.  The motion of the debris plume will remain predictable, and can be derived from satellite data as long as the current and the eddy are distinct.  Scientific modeling and drifting technology are provided by the University of Hawaii, and Scripps Oceanography respectively.

The International Pacific Research Center (IPRC) at the School of Ocean and Earth Science and Technology (SOEST), University of Hawaii at Manoa, is a climate research center founded to gain greater understanding of the climate system.  The center studies the nature and causes of climate variation in the Asia-Pacific region, and how global climate changes may affect the region.  Established under the "U.S.-Japan Common Agenda for Cooperation in Global Perspective" in October 1997, the IPRC is a collaborative effort between agencies in Japan and the United States.

Work at the IPRC on the tsunami debris is summarized at
http://iprc.soest.hawaii.edu/news/marine_and_tsunami_debris/debris_news.php

Scripps Institution of Oceanography, at UC San Diego, is one of the oldest, largest and most important centers for global science research and education in the world. The National Research Council has ranked Scripps first in faculty quality among oceanography programs nationwide. Now in its second century of discovery, the scientific scope of the institution has grown to include biological, physical, chemical, geological, geophysical and atmospheric studies of the earth as a system. Hundreds of research programs covering a wide range of scientific areas are under way today in 65 countries. The institution has a staff of about 1,300, and annual expenditures of approximately $155 million from federal, state and private sources. Scripps operates one of the largest U.S. academic fleets with four oceanographic research ships and one research platform for worldwide exploration.

Horizon Lines LLC is the leading company in domestic shipping and integrated logistics. Its fleet consists of 20 ships connecting the mainland US with Alaska, Hawaii and Puerto Rico.  Horizon Lines, through its HorizonGreen program, is committed to understanding and measuring its impact on the environment, and the marine environment in particular.
www.horizonlines.com