Tracking the tsunami debris from the March 11th, 2011 earthquake in Japan, using the SCUD model of the surface ocean currents.

This information shows the estimated trajectory of debris after the March 11th, 2011 tsunami in Japan, plotted here on a daily basis.  The SCUD  diagnostic model of surface currents is employed to track tracers released from the NE coast of Japan on March 11th. The total number of tracers released was 678,305, and they were initially distributed along the NE coast of Japan and weighted relative to the population.  The plot dated March 11th shows the initial distribution of tracers along the coast.   The tracers have then been advected by SCUD currents and their location plotted for each day.  The last 10 days are plotted  on this page, while the animated movie contains all days since March 11th, 2011. 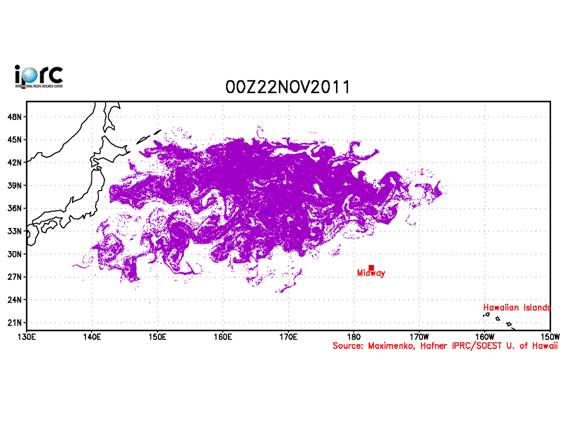