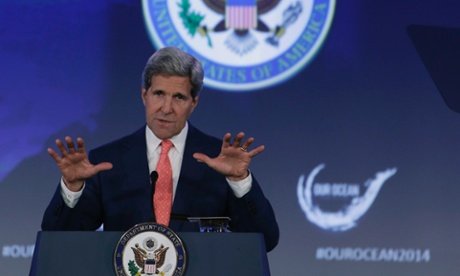 The US secretary of state, John Kerry, says saving the world's oceans was a vital security issue, and has urged leaders at an international summit to take immediate action on overfishing and pollution.

Kerry, speaking at the start of the summit, said humans had caused “enormous damage” to the oceans, jeopardising the food security of three billion people on the planet.

The two-day conference includes officials from 80 countries, and is the most visible effort to date by the Obama administration to lead a global conservation effort for the oceans. To that end, the State Department on Monday announced that actor Leonardo DiCaprio, who recently donated $3m to Oceana, will attend the summit on Tuesday.